back to playlist
location on Google Map

i/ˈɡæmbiə/, officially the Republic of the Gambia and often called simply Gambia) is a country in West Africa mostly surrounded by Senegal with a short strip of its coastline bordered with the Atlantic Ocean at its western end. It is the smallest country on mainland Africa.

The Gambia is situated on either side of the Gambia River, the nation's namesake, which flows through the centre of the Gambia and empties into the Atlantic Ocean. Its area is 10,689 square kilometres (4,127 sq mi) with a population of 1,882,450 at the 15 April 2013 Census (provisional). Banjul is the Gambian capital, and the largest cities are Serekunda and Brikama.

The Gambia shares historical roots with many other West African nations in the slave trade, which was the key factor in the placing and keeping of a colony on the Gambia River, first by the Portuguese, during which era it was A Gâmbia, and later, on 25 May 1765, the Gambia was made a part of the British colony when the government formally assumed control, establishing the Province of Senegambia. On 18 February 1965, the Gambia gained independence from the United Kingdom. Since gaining independence, the Gambia has had two leaders – Dawda Jawara, who ruled from 1970 until 1994, when the current leader Yahya Jammeh seized power in a coup as a young army officer. 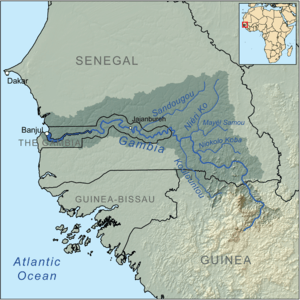 The Gambia River (formerly known as the River Gambra) is a major river in West Africa, running 1,130 kilometres (700 mi) from the Fouta Djallon plateau in north Guinea westward through Senegal and the Gambia to the Atlantic Ocean at the city of Banjul. It is navigable for about half that length.

The river is strongly associated with the Gambia, the smallest country in mainland Africa, which consists of little more than the downstream half of the river and its two banks.

From the Fouta Djallon, the river runs northwest into the Tambacounda Region of Senegal, where it flows through the Parc National du Niokolo Koba, then is joined by the Nieri Ko and Koulountou before entering the Gambia at Fatoto. At this point the river runs generally west, but in a meandering course with a number of oxbows, and about 100km from its mouth it gradually widens, to over 10km wide where it meets the sea.

Near the mouth of the river, near Juffure, is Kunta Kinteh Island, a place used in the slave trade which is now a UNESCO World Heritage Site.